The other pages on this website tell the history of 58 Bde RFA (History), provide what biographical details I have been able to discover of those who served in the unit (Personnel) and, for a small proportion, include a photo of them (Gallery).

This page though displays some of the more personal items from their time serving in the unit, so includes some of their possessions and uniform, as well as some of their letters and key documents. It also includes a sample of the memorials provided to commemorate those who died while serving.

Uniform and Equipment
The badge of the three branches of the Royal Artillery (the Royal Field Artillery, Royal

Horse Artillery and Royal Garrison Artillery) were identical. The metal badge depicts an old 19th Century style field gun, with above it a crown and the motto “Ubique” (Everywhere) and below it another motto, “Quo Fas Et Gloria Ducunt” (Everywhere That Right And Glory Lead).  It was worn on the soft-peaked cap that was issued to every man and in which they fought until the issue of helmets in 1916 – exactly when the men of 58 Bde were assigned their helmets is not clear.  This badge belonged to Gunner Arthur NOBLE (L/5762) of A/58. 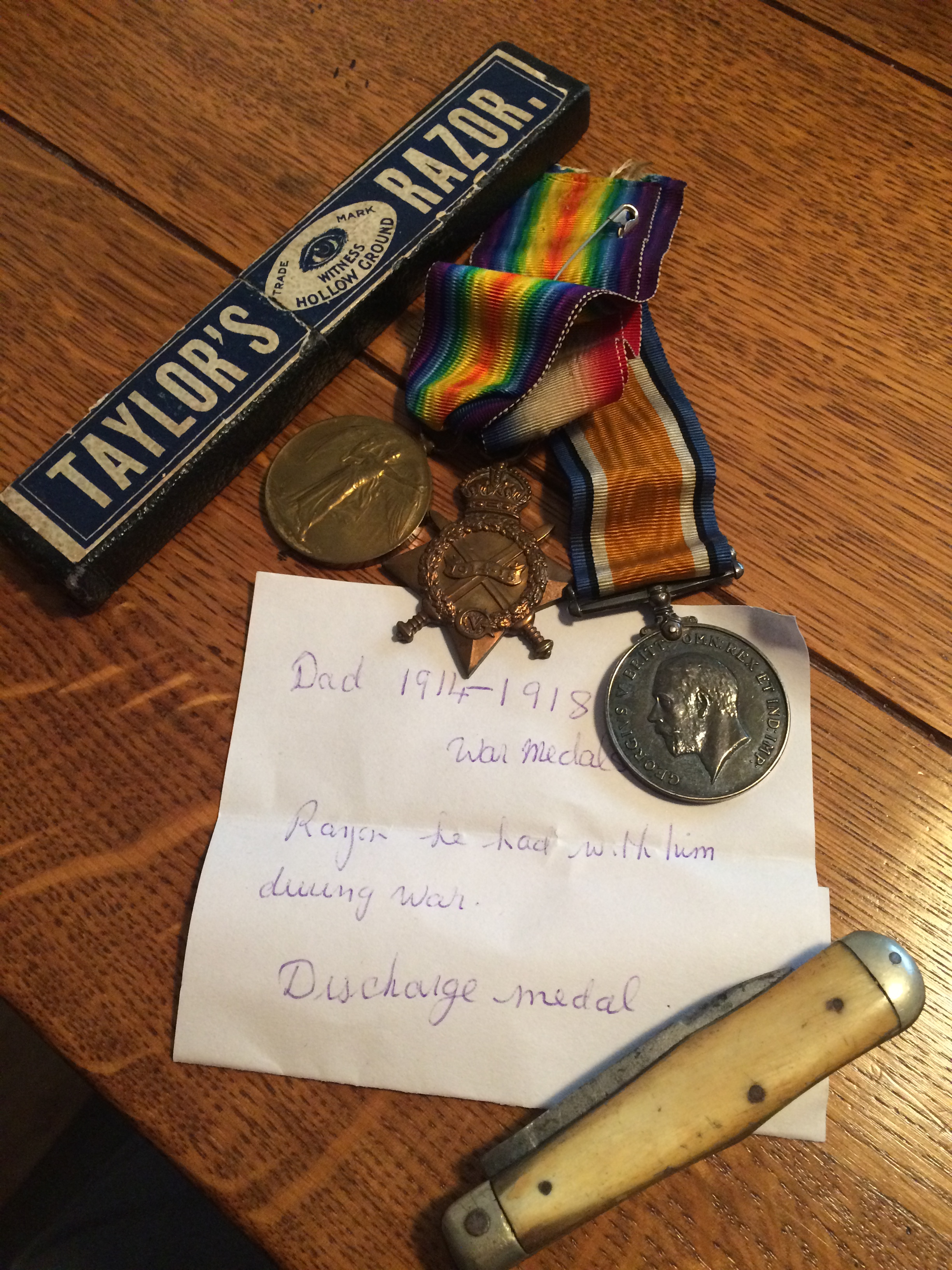 smart appearance. At parade, the soldiers’ appearance would be inspected and if it fell short of what was expected, the soldier could anticipate some form of punishment. Being clean-shaven was one such requirement and here is the razor used by Bombardier James Abraham MURKIN (21079).  Gunner Andrew EVANS (10995) might have been awarded the Military Medal for bravery and been wounded and was in the process of recuperating, but he was nevertheless severely reprimanded for still being unshaven at 3pm one day in hospital.

Maps were vital in warfare,  especially for the artillery which needed them to be able to work out potential targets and trajectories. The British Army was well-served by the Ordnance Survey, which was responsible for their manufacture, though early in the war there were just too few maps to go around. It may be slightly surprising then that at the time of his death, 2/Lt Robert Charles BRAGG, the most junior officer in A/58, appeared to have had at least three maps of the area of Suvla Bay in which the brigade was fighting. This one shows potential firing lines for, presumably, the section of the brigade Bragg was responsible for at the time.

To help with carrying maps, it appears that some officers, including Captain Arthur Foulkes Baglietto COTTRELL, acquired specialist cases. His case was carried on the back like a ruck-sack and measured about 30cm x 35cm while folded. 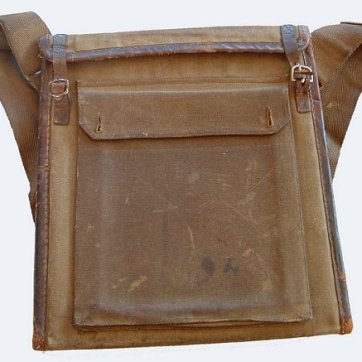 When the case is opened it is possible to see how the maps were displayed, and Cottrell’s name can be seen inscribed inside.

The website The Long, Long Trail provides an excellent summary of what happened to soldiers when they were sick or wounded. All too many of 58 Bde’s officers and men became familiar with this chain when they fell sick with diseases such as malaria,

dysentery or jaundice, or were wounded, usually by shrapnel, though this was usually referred to as “gun shot wounds” since shrapnel was made up of metal balls very similar to bullets.  Bombardier James Abraham MURKIN (21079) was wounded while serving in C/58 and was evacuated from the battlefield to No.4 General Hospital in Camiers, France, where he was given this bible by the chaplain.  He noted down on an inside page of the bible some of the dates of his service as well as the fact that he had

operations in both France and back in the UK.  After Camiers, he was evacuated back to the UK to recuperate in the Hospital of St. John and St. Elizabeth in London where presumably he picked up this postcard.

He was also photographed being

wheeled around the grounds by an orderly.

If a man’s injuries were so severe that he was deemed no longer fit for service, either at home or abroad, then he was discharged from the Army and awarded a Silver War

Badge for him to wear in his lapel so that he would not be unfairly accused of being a shirker. He was also provided with a commemorative scroll and letter from the King thanking him for his service. These documents belonged to Bombardier Thomas Edmund GARLICK (12643) who had been serving in A/58 when he was wounded by shrapnel in the leg, breaking his left femur and requiring him to wear a surgical boot, so was discharged from the Army on 3 April 1918.  Although the letter suggests that Thomas met the King, he decided in fact not to attend the ceremony to receive these documents, believing it to be a “fuss over nothing”.

Fatalities and Memorials
When a soldier was killed, their next of kin would receive a telegram or a form from the

War Office informing them of the death. These were very formulaic, so for example, the telegram sent on 6 September 1915 to William Bragg, the father of 2/Lt Robert Charles BRAGG, simply stated: “Deeply regret to inform you that 2Lt R C Bragg RFA died of wounds at sea on 2nd Sept.  Lord Kitchener expresses his sympathy.”

The forms, which may have replaced such brief telegrams later in the war, were mostly pre-printed, allowing for just a few brief details to be added. This form was sent to the father of Gunner Arthur NOBLE, L/5762 and shows that the sympathy is expressed now as coming from the King, rather than – as Robert Bragg’s notification had been – from the then Secretary of State for War.

Later, the family would receive a inscribed scroll sent in the name of King George V commemorating the self-sacrifice of the dead man, such as this one sent to the family of Driver George Edward FLOWERS (42713) of D/58 who died of his wounds on 13 Mar 1917.

by his commanding officer so that he could attach it to his battle-dress over his left breast.  This might happen only a few days or weeks after his act of bravery.  It would often take a few months, typically 3-4, before the honour was gazetted, i.e. was formally announced in the London Gazette.  In this photo of Captain Roland Osborne BULL, the ribbon of the Military Cross he won in 1916 is very clear to see.

The actual medals were not made and presented until many months later, and a soldier could choose whether to have it formally presented to him or just have it posted.  Similarly, campaign medals such as the British War Medal were made after the war and were engraved with the man’s name around the edge.  They were posted to the soldiers, or their next of kin for those who had died, a couple of years after the war had ended.

This set of four medals were awarded to Bombardier Thomas Edmund GARLICK (12643).  They

comprise his trio of First World War Medals: the 1914-15 Star, the British War Medal and the Victory Medal as well as his Military Medal which was awarded to him while he was serving in A/58 in probably late 1916, the award being gazetted on 6 Jan 1917.  Interestingly, these medals have not been set in the usual precedence order where the Military Medal should be on the left.  The medals were mounted and put in that order at the uniform shop in Catterick Garrison specifically for Thomas’s granddaughter to wear over the right breast.  Thomas’s family were unaware that he had been awarded the Military Medal until it was discovered at the back of a wardrobe fifty years after the war had ended. 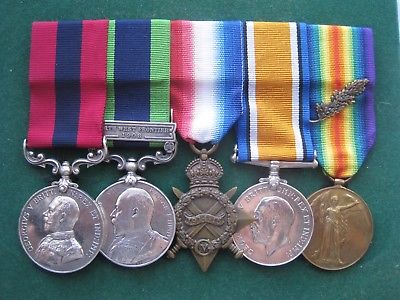 the colours on the outbreak of war, despite having emigrated to Canada at the time.  He served with distinction until he was killed in action in 1917 while in D/58. His medals comprise the Distinguished Conduct Medal, won in early 1916 while serving in 118 Bde RFA a few months before his battery was re-assigned to join 58 Bde; the India General Service Medal (1908-35) with North West Frontier Clasp, showing his service in what is now Pakistan before the First World War; and his trio of First World War Medals: the 1914-15 Star, the British War Medal and the Victory Medal. The bronze oak leaf spray on the ribbon of his Victory Medal show that he was also Mentioned in Dispatches.  This set of five medals went on sale in 2018 and was sold for £1200.

I am deeply indebted to all those who very generously allowed me to reproduce these items.  They are: The William H. Bragg and William L. (Lawrence) Bragg papers, The University of Adelaide Library (for R C Bragg’s map);  The Imperial War Museum ref © IWM (HU 114635) (for the photo of R O Bull);  Grant’s Militaria (for A F B Cottrell’s map case);  Juliet Crowther (for items related to G E Flowers);  Ray Dempsey (for items related to T E Garlick);  Cotswold Auction Co (for P McCorkindale’s medals); Maggie Sanderson (for items related to J A Murkin);  Tim Colman (for items related to A Noble).