One of the six new divisions being raised by Kitchener was 11th (Northern) Division, one of whose artillery brigades was to be 58th Field Artillery Brigade (58th FAB, also known as 58th Bde RFA).

This brigade initially comprised a Headquarters, three artillery batteries numbered 184th, 185th and 186th each with 6 field guns, and a Brigade Ammunition Column, and started training in Chapeltown Barracks, Leeds.

In January 1915, the army decided to expand the number of batteries in each brigade to four and reduce the number of field guns per battery to four.  The new batteries were renumbered as A/58, B/58, C/58 and D/58.

In the spring of 1915, the brigade moved to Milford Camp, near Godalming, Surrey, to begin training with the rest of the division.

The 11th (Northern) Division, with 58th Bde RFA in pride of place as the senior brigade in the artillery, was inspected on the nearby Thursley Common by King George V on 31 May 1915.

The ship passed Gibraltar on 5 July and stopped off briefly for a couple of hours at the large British naval harbour in Valletta, Malta, on 9 July before finally reaching Alexandria in Egypt at 1030 a.m. on 12 July.

Meanwhile, D/58 sailed from Devonport on 5 July 1915 in the Australian troopship, the HMAT Karroo, arriving in Alexandria on 18 July.  The brigade went into camp at Zahrieh on the outskirts of Alexandria.

On 24 July 1915, the first party of the brigade, comprising one officer and 32 men, sailed from Alexandria on the SS Saldhana.  They were bound for Mudros harbour on the Greek island of Lemnos.  The Greek Government was allowing the Allies to use Lemnos and its nearby neighbouring island of Imbros as forward bases for the Gallipoli campaign.

Between 8 and 11 August, the brigade’s men, horses, guns and wagons were landed near Suvla Bay on the Gallipoli Peninsular, disembarking from the transport ships onto the “beetles” which ferried back and forth from the ships moored at anchor and the beaches.

The landings achieved good surprise against the Turks and were relatively straightforward.  But after the initial success, stalemate ensued as the Turks rushed reinforcements in and secured the high ground overlooking the bay.

Conditions were not good for the men – the terrain was barren and the summer temperatures were very high.  Diseases started to take their toll and while most would eventually recover, not all would.

As the year wore on, the cold set in and temperatures fell to well below freezing, for which the men were ill-prepared and ill-supplied.

Along with the rest of IX Corps, 58th Brigade fought at Gallipoli until the end of that doomed campaign and they were withdrawn between 30 November and 19 December 1915, first to the Greek islands and then in January 1916 back to Alexandria.

After a short period to rest and bring the unit back up to strength with re-inforcements, they were deployed to el Ferdan, near Ismailia, in mid-March to help bolster the defences of the Suez Canal against a potential attack from the Ottoman Army.

In April, 11th (Northern) Division decided to create a specialist howitzer brigade to be called 133rd (Howitzer) Brigade.  To help form this, D/58 was posted en masse to join this new unit as A/133.

On 24 June 1916, the brigade started on its journey to join the majority of the British Army on the Western Front.  They boarded trains that would take them to the Gabbary docks in Alexandria and then by the transport ship Kingstonian to Marseilles, where they landed on 2 July.  A further journey by train took them up to camp at Sanvic, just outside Le Havre.

At Sanvic they welcomed a new battery to act as D/58.  This battery was transferred to them from 118th (Howitzer) Brigade.

They joined II Corps and deployed near Agny on 18 July, going into action soon after.  They remained in action for the next 5 weeks, when, following a few days rest, they were temporarily attached to another old Gallipoli unit, 29th Division, to provide additional firepower to help an attack that was going to be made either side of the River Ancre on 3rd September.

Two days after the failed attack astride the Ancre, 58th Brigade moved a few miles south east to what the British called “Mash Valley”, near Ovillers-la-Boisselle to re-join the rest of 11th (Northern) Division.

They were to stay in this general area for several months, and were involved in the Battle of Thiepval Ridge in late September before moving to Courcelette, a place referred to by one member of the brigade as “that Hell hole”. 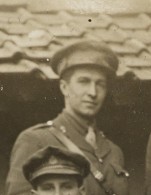 The brigade finally had a period of extended rest between 24 January and 21 February 1917.  This was spent in the small village of Montigny-les-Jongleurs where men were able to rest and replacements – both of men and animals – were welcomed.

As they started heading back to the front, they discovered the Germans had effected a large-scale withdrawal, known as Operation Alberich, and had set up a new front line on the Siegfriedstellung, known to the Allies as the Hindenburg Line.

Much of the Spring of 1917 saw the brigade on the Somme at various locations between Amiens and Arras until in late May, having been transported by train north into Flanders, they took up positions between Kemmel and Vierstraat on 28 May in preparation for the Battle of Messines.

During the battle, the brigade advanced behind the gains made by the British and Canadian infantry to Wytschaete, where they remained until 28 June when they had a period of rest.

They then moved into the Ypres salient to take part in the Third Battle of Ypres, more commonly known as Passchendaele, and were involved in the Battles of Langemarck in August, Polygon Wood in September and early October, Broodseinde and Poelcapelle, both in early October.

Most of the brigade then withdrew back into France to Béthune for a fortnight’s rest, while A/58 went to the 1st Army School at Aire.

Between 6 November and 23 December 1917, the brigade was in constant action near Liévin, on the outskirts of Lens, with A/58 rejoining them on 3 December from the training school.

In early 1918, the brigade was stationed north of Lens near the town of Mazingarbe.  This was fortunate for them since they happened to be in the part of the line which was not subject to the major offensives launched by the Germans in the Spring of 1918: the first German offensive on the Somme took place south of them, while the second offensive on the Lys was to the north of them.

Instead, while much of the line to their north and south was pushed back, they stayed in place though were in action regularly, suffering particularly concentrated gas attacks in early April, resulting in the hospitalisation of many of the officers and men.  The brigade remained in action until 17 July when they were finally granted a week resting in billets at Le Vielfort.

They returned though to Mazingarbe in late August to take part in the Second Battle of Arras as part of what would become known as “The Hundred Days”.

After that battle finished, the brigade was constantly on the move, pushing forward and deploying when needed to help the infantry overcome German resistance as their lines started to break and fall back.

On Armistice Day, the brigade found itself in southern Belgium, in Quévy-le-Grand, having taken part in the pursuit of the retreating German Army.  They stayed there a fortnight, and them moved to St. Amand until 14 March 1919 and finally to Haulchin on the River Scheldt.

During the first six months of 1919, almost all of the men returned to the UK for demobilisation and a return to civilian life and 58th Brigade was disbanded.